Posted on April 24, 2019 by intelligentchristianfaith 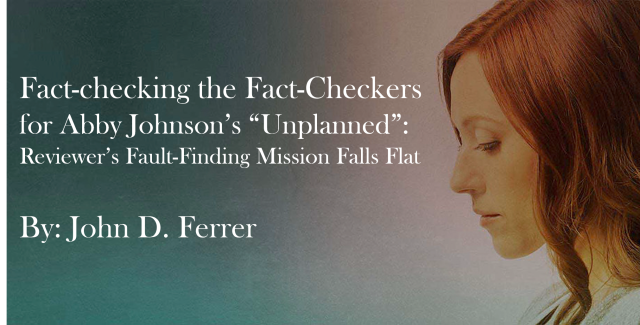 Fact-checkers need to be fact-checked sometimes. A recent Huffington Post article by Melissa Jeltsen is no exception. Delicately titled, “The Anti-abortion Movie ‘Unplanned’ Is Loaded With Dangerous Lies: So HuffPost Talked to an OB-GYN to debunk them.” (17 April 2019). This is a flagrant “hit-job” against the controversial pro-life movie, Unplanned about Abby Johnson’s voyage from Planned Parenthood director to pro-life advocate. Abby has been enemy #1 for Planned Parenthood before, so this is familiar territory.

The question however, is not whether the writer Jeltsen or her interviewee are biased, progressive, abortion-lobbyists, liberal-democrat, or any of that. The big question here is whether she’s telling the truth. The truth is the truth, no matter the source.

But it doesn’t hurt to know the source for controversial claims, and this article has a lot of them. HuffPo sought an expert voice to give a negative review of the movie. Enter Dr. Jen Villavicencio, an Ob-Gyn and abortion provider. HuffPo is unabashedly liberal-progressive, and Dr. Villavicencio, is financially and vocationally tied to abortion practice. This article was never intended to be a “fair and balanced” review of the movie. There are layers of bias here. While that fact doesn’t falsify this article, it doesn’t lend any credibility either. Responsible readers should give pause before swallowing what Villavicencio is feeding them.

But again, the question is not whether this report is biased, pro-choice, or partisan. The question is whether Dr. Villavicenio is telling the truth.

If only she were telling the truth. Let’s look at her major claims and test them for accuracy.

1. “A fetus unrealistically appears to struggle for its life against an abortion”

She’s referring to the suction-abortion procedure, in the film, for a 13 weeks pregnant mother. Now, she’d have a hard time making this claim with reference to late-term abortions, since viable children-in-utero have survived premature birth as early as 21.5 weeks, and they, indisputably, respond to stimuli and reflect a pain response. Only 1st and early 2nd trimester abortions could realistically fit within this sweeping claim.

Still, there are a couple problem here. First, the fetus is a human fetus, that is, a biological human. We have not slipped from human abortion to generic undifferentiated animal abortion of whatever kinds. Leaving out the “human” in “human fetus” is dehumanizing. It’s not false but it is misleading in the sense of biased rhetoric, and that’s worth noting.

Second, the fetal human is a male or female (or, in rare cases, intersex), but not an “it.” Again, it’s dehumanizing to treat the fetal human like a mere object (an “it”) instead of subjective pronoun (he/she/him/her).

Third, and to the author’s point, it is realistic to portray the fetal human, at 13 weeks, reflecting the known neural and motor development of human fetuses at that stage. The film does that. Now, Dr. Villavicenio seems offended that fetal movement, responding to environmental stimuli, can give the appearance of self-awareness and some conscious struggle for survival. But, the facts of the matter are that fetal children, at that stage of development, have a brain and nervous system, and they are capable of a wide range of movements, on their own, and even have a sense of touch. Being touch-sensitive, they can respond to environmental stimuli whether it’s the mother touching her belly, or an abortion-surgeon using a canella to vacuum him out of the womb.

2. “According to the American College of Obstetricians and Gynecologists [ACOG], a fetus does not have the physiological capacity to perceive pain until at least 24 weeks of gestation.”

The ACOG, which is an abortion-choice organization, does make this claim. But they are mistaken. Its common practice now, among fetal surgeons, to administer anesthesia to both child and mother before procedures. The reason is simple, children-in-utero exhibit a pain/stress response during surgery that raises complications, unless they are anesthetized. The child benefits from anesthesia the same way the mother does; it reduces pain.

The 24 weeks gestation claim, is outdated too. In the past, 24 weeks was thought to be the cut-off for fetal viability. But, since premature babies have survived as early as 21.5 weeks, we know from direct experience with born children that they reflect all the features of pain-sensitivity.

Fetal humans have pain receptors throughout their bodies by 8 weeks gestation and have the same response to pain stimuli at 20 weeks as adults have, with beta-endorphins, cortisol, and noradrenaline.

Now, critics eagerly dispute whether that child is experiencing pain or just acting that way. But that’s disingenuous because it veers from medical science into philosophy of mind, without signaling a lane change. Philosophers love to argue about “the problem of other minds,” and whether anybody can know (with certainty) that other minds exist. It’s a pet argument for skeptics to haggle over. They argue, for example, that a person may act like he’s feeling pain but since we can only see his actions, not his pain-experience, we’ll never know if he experiences pain or if he has any experiences at all.

To my knowledge, that argument is not a serious facet of medical science, nor should it be. We are on much safer ground, in bioethics, granting that individuals who have physiological pain responses are in pain. We don’t need to detour into a sophisticated argument about minds, consciousness, or personhood. We’re just talking about physiological pain, and fetal children can feel that somewhere between 8 and 20 weeks gestation.

3. “Planned Parenthood is falsely depicted as a for-profit abortion business”

And anyone who’s worked with non-profit and not-for-profit organizations understands that they still have to generate income just to stay afloat.

4. “Abortion makes up only 3.4 percent of its services, according to its most recent annual report. “

Yes, their most recent report says abortion is 3.4% of their services. But this twisted statistic is dishonest. Abortion is their primary service, it’s their means of revenue, and it’s the main reason people go to the clinic – they think they might be pregnant, and they are considering abortion. Abortion services are not 3.4% of their revenue, or 3.4% of what they advocate and lobby for, or 3.4% of their focused attention. But with some statistical gymnastics, they can produce a nice, small number so that Planned parenthood looks like it’s mostly just a walk-in healthcare clinic for women. But, Washington Post fact-checker debunked this “3% statistics. And Slate Magazine calls it the “most meaningless statistic ever.” Rich Lowry, writing for the New York Post, explains how this number is so misleading.

“By Planned Parenthood’s math, a woman who gets an abortion but also a pregnancy test, an STD test and some contraceptives has received four services, and only 25 percent of them are abortion. This is a little like performing an abortion and giving a woman an aspirin, and saying only half of what you do is abortion.

Such cracked reasoning could be used to obscure the purpose of any organization. The sponsors of the New York City Marathon could count each small cup of water they hand out (some 2 million cups, compared with 45,000 runners) and say they are mainly in the hydration business.

Abortion is horrifying, that’s true, but that’s realism, not sensationalism. The movie is actually pretty tame compared to actual horror movies. I was expecting more images of dismembered babies, and far more blood than the movie had. I remember only a couple scenes that had any significant blood in it. One was a pill abortion where the mother had significant bleeding, but that’s an accurate description of known side effects of pill abortions. They didn’t need to exaggerate. Realism is horrifying enough.

The other bloody scene was of a teenager who hemorrhages during an abortion, and the surgeon has to act fast to stop the bleeding. She doesn’t die, but she loses a lot of blood. There’s no serious dispute about whether severe bleeding is a complication that sometimes happens in abortions.

The movie does focus attention on the negative outcomes of abortion, including medical risks, complications, family issues, and so on. But it’s still honest about all of these. Abortion is extremely dangerous since it has a fatality rate of 100% for all children-in-utero. And, since it’s an elective procedure, none of its side effects, risk factors, and potential complications are necessary conditions of pregnancy.

It’s dishonest to act like abortion doesn’t have any risk of serious complications like bleeding, punctures, cuts, organ damage, cervical damage, or infection. I’m not saying these happen all the time, and neither does the movie say that. But abortion does have serious risks.

Now, we don’t exactly know how often women have serious complications short-term or long-term with abortion since the whole field is notoriously private. Women often hide past abortions, even in their medical history. Plus, there is no formal required reporting for abortion complications. So, when you read stats like: “only 4 women died of [abortion] complications” (para. 21)– you should know that that statistic doesn’t mean very much. Hospitals aren’t required to say that a woman died from an attempted abortion; they can just as easily report it as death from pregnancy complications. That reporting bias makes insurance payouts easier and helps spare the family some embarrassment.

7. “Abortion clinicians are portrayed as villains and monsters”

Some are portrayed that way, some aren’t. Abby Johnson does tell about her own, direct, experience with clinic directors and representatives and she was even taken to court by Planned Parenthood. But she won the case because she was telling the truth. Sadly, it’s not uncommon for some people to take on the “villain” role in the workplace. Abby had a boss, in the movie, who was clearly the “villain” in the movie. This phenomenon isn’t unique to abortion clinics, it’s liable to happen at any big company that fosters competition and rewards ambition. It would be unreasonable and dishonest to present all abortion-clinicians in a positive light.

Meanwhile, this movie was actually pretty gracious in the way it portrayed abortion-clinicians. For one thing, the main character spent most of the movie employed with Planned Parenthood. The storyline revolved around her good intentions, her struggle through abortion-choice ideology, her sympathy for struggling mothers, and her passion for helping abortion nurses. Most of her coworkers were jovial, likable characters who were just doing what they thought was right – working for Planned Parenthood. The movie’s treatment of clinic workers has proven so compelling and persuasive that as many as 94 clinic workers left the abortion-business after watching Unplanned.

The movie didn’t claim this, not explicitly at least. The statement refers to a claim by Abby’s character who says that when protesters are praying outside Planned Parenthood clinics, the rate of abortions that day goes down. But, right after this statement, she explains that patients driving to the clinic drive around and around the clinic to avoid being seen, but the prayer protesters are there watching. So potential patients just eventually just drive away, leaving the clinic and missing their appointments.

Now, the movie features some “prayer warriors” in the form of Shawn and Marilisa Carney, leaders in the Forty Days for Life movement. They have a powerful influence on Abby Johnson, eventually helping her to leave planned parenthood and mobilize as a pro-life advocate. So, there is definitely a pro-life message that’s focused on prayer. But they aren’t making any claim that prayer has magical properties. The main characters are all Christians anyway, and so the real “power” behind prayer isn’t magic, or luck, or will-power. The power behind prayer is God. If Christianity is true, and prayer works, then that prayer works because an intelligent personal God heard and responded to those prayers, that’s not magic, that’s just how communication works.

This site uses Akismet to reduce spam. Learn how your comment data is processed.